3 months: into a rhythm 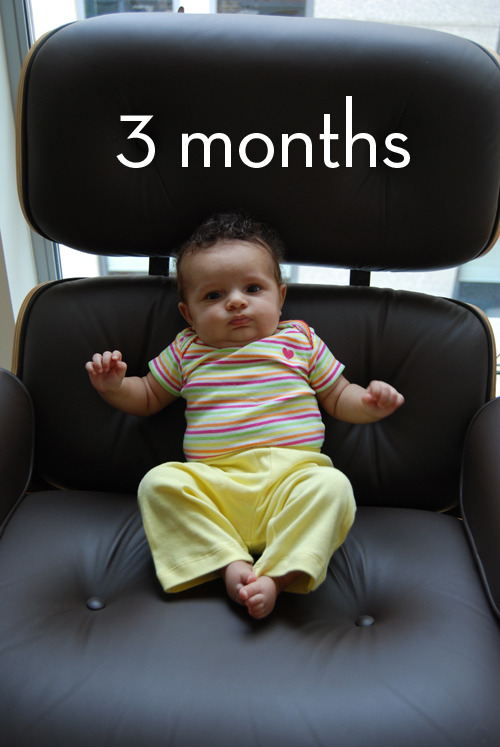 Parker and I had lunch at a friend’s house recently and she said, “You look like you really know what you’re doing.” I think that’s the highest complement someone can give a new parent. I certainly don’t feel like an expert but it has definitely gotten easier since those early days. It feels like we’re finally getting into a rhythm.

Andy and I are constantly monitoring her progress. She recognizes us, which is nice after months of her seeming to look past our gaze. She’s cooing and laughing and getting chubby. She can sit upright, if supported, and is inching toward rolling over when on her stomach. It’s amazing to watch her learn to use her arms, hands and head. One day she’ll just be staring blankly at a new toy we put in front of her and the next day she’s deliberately reaching for it. It’s fascinating to watch those neural-physical connections being made on a daily basis.

After all of the trouble she gave us while still in the womb, she’s an easy baby outside in the world. Very relaxed and happy. When she does fuss or cry, it’s easily identified as either hunger or tiredness. I’m told we’re lucky that she’s already sleeping through the night. I haven’t been able to enjoy that much yet since I’m constantly on baby alert even when I should be sleeping. I’m looking forward to her being more social and interacting with other babies. She had a visit with her cousin Cole, who is 7 months old, and it was cool to watch her study him.

The project of the moment is getting her on some kind of eat-play-sleep schedule. She’s doing pretty well with it; it’s Andy and I that have trouble keeping track of what happens when.
Labels: regular