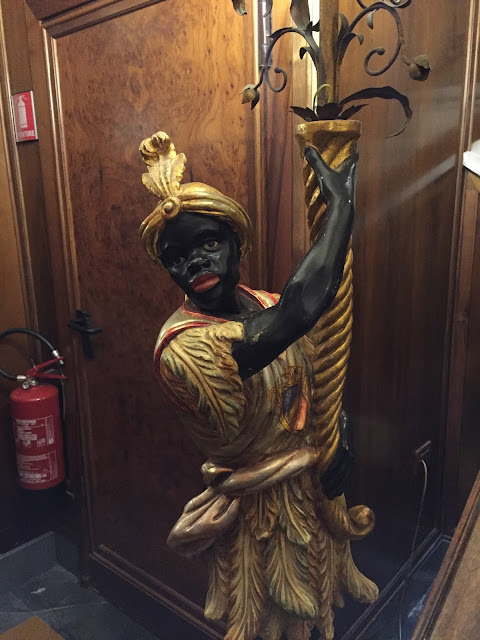 The husband and I are in Italy for a couple of weeks. It's been on my destination list for years and it was finally time. We started in Venice and have been getting lost among the winding bridges and canal-side streets.

Wandering down a narrow alley in Venice, I spotted a pair of brass door handles in the shape of a black man's head. Expressionless but easily identifiable as African: curly hair, wide nose, thick lips. When I saw him my first thought was "that's racist!" Andy disagreed.

Then I started to see so-called BLACKAMOORS everywhere. Door handles, candle holders, lamps like the one above in our hotel and more. As soon as I found wifi, I started reading about them. Painted in deep shades of dark brown and black, they depict elegantly dressed people in acts of servitude: illuminating hallways, bearing trays and cups, holding up tables ... Not unlike the black lawn jockeys of years past, these footmen and waiters personify racial conquest.

With more fallen black man in Alton Sterling and Philando Castille, I can't help but be struck by this ever-present fascination with "exotic" black bodies. Italy was very much involved in the African slave trade of the 17th century.

According to The Antiques Guild:


“The Venetians of the time employed these Northern Africans as servants and bodyguards and trusted heads of grand houses. The depictions of these works of art reflect this high regard … and have little relevance to the black Americana depicting slaves in America. Many people often mistake Blackamoors for these pieces of American history and have associated them incorrectly. True blackamoors hold much more value as antiques due to their age, and are crafted in a very different spirit.”

Although the images have been exploited and depicted negatively (most appeared to be servants of some sort), they never lost the grace and style inherent in the original people. In other words, beneath the brightly painted lips and dark black paint is a regal-ness. That may be both the appeal and repulsion of the blackamoor figures.

I definitely feel some kind of way about them. It's complicated.